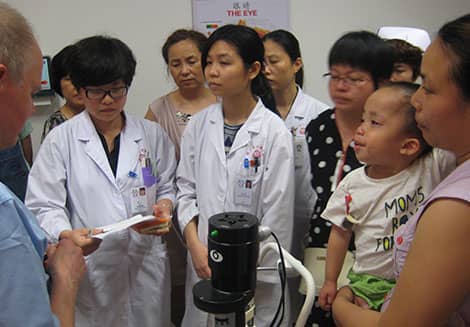 Exposure of rural Chinese ophthalmologists to outside ophthalmic information is limited.  To help address this need WSF has entered into partnerships with the Lifeline Express and Sheen Hok Foundations both of which are based in Hong Kong. The emphasis of the Lifeline Express Foundation, (founded by Mrs Nellie Fong) has shifted from a service delivery model to that of a teaching one; that of the Sheen Hok Foundation (founded by Mrs Alice Chiu) concentrates on paediatric ophthalmology.

Over a 5 year period from 2012-16 WSF has, in partnership with The Lifeline Express Foundation contributed to ophthalmic teaching in a number of rural Chinese cities (for example in Sichuan, Qinghai, Hainan, Jiangxi and Henan provinces). This initiative, conducted by a group of retinal experts from the UK, Europe and the Far East, has been directed at ophthalmologists in training and has concentrated on retinal disease.

WSF is anxious to concentrate its efforts into one centre at Mianyang city and in 2016, responding to local requests, a three day course in paediatric ophthalmology and ocular plastic surgery conducted by one of our Trustees, Mr Richard Markham, and by Miss Rebecca Ford who both work at the Bristol Eye Hospital.

Our partnership with The Sheen Hok Foundation started in 2015 and a teaching course in Squint and Amblyopia was conducted at Han Dan City Eye Hospital in Hubei province. The course was attended by a wide selection of ophthalmic personnel gathered from various ophthalmic centres already being supported by Sheen Hok.

A similar course conducted by Mr Richard Markham and Mrs Jane Tapley was held at Haikou city, Hainan province in 2016.

All donations to The World Sight Foundation go directly to help the initiatives we support.